Baste celebrates 81 years of journey as one strong community

Baste celebrates 81 years of journey as one strong community 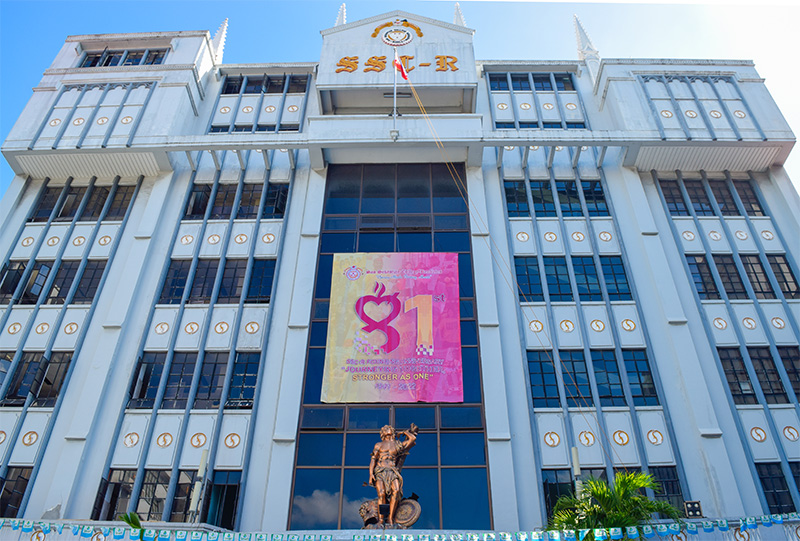 Bannering this year’s theme: “Journeying Together, Stronger as One”, San Sebastian College – Recoletos, Manila marked its 81st Foundation Anniversary. Despite being postponed due to the surge in COVID-19 cases last January, the Sebastinian community successfully staged a virtual celebration on March 28-30.

Rev. Fr. Henry H. Santiago, O.A.R., College President, encouraged the whole community through his homily during the opening mass “to strengthen our faith by deepening our relationship with God and repairing our relationship with one another.” He also highlighted that the participation and commitment in making the institution’s journey meaningful is due to everyone’s belief in its vision and mission.

The festivities kicked off with the Opening Salvo where Sebastinians, current and alumni, came together to commemorate the long journey of Baste in becoming a strong institution. Highlights of the event were the video recollection of SSC-R, Manila’s history, the performances of select students, and the expression of greetings and gratitude by the alumni.

Recoletos Star was launched in search for the new OAR schools’ ambassador embodying the qualities of a true Recollect student. Contestants showed their skills, wits, and personalities through their video entries.

Outreach Day was the highlight of the morning of day two. Sebastinian Community Development and Extension Office spearheaded the event at the new partner community where they donated books, school supplies, and hygiene kits. Online storytelling with Ms. Kathie Lee Berco also entertained the children in the community. Meanwhile in the afternoon, seven researchers from both Manila and Canlubang campuses presented their research works during the Caritas et Scientia Research Colloquium.

Finals of the E-sports and Speech Fest were held on day three. In true Sebastinian spirit, the community once again gathered for the Pistang Sebastino, a festive tradition where members of the community strengthen the bond through socialization, sharing food and stories with each other.
Moreover, 31 service awardees from both Manila and Canlubang campuses were honored through a virtual recognition. Fr. Santiago described the event as “special, not only for the awardees but also for all … because you’re all part of the human resource component which strengthens our fiber as an educational institution.”

Capping off the three-day celebration, a virtual concert was streamed live via Stags Facebook Page. Members of the Sebastinian community showcased their talents through song and dance performances. Winners in the different contested events were also announced. Rev. Fr. Arnel F. Diaz, O.A.R., Director for Basic Education, closed the event with his message of gratitude and encouragement to everyone to continue journeying and staying strong with SSC-R, Manila.

Order of Augustinian Recollect Schools in the Philippines

For any questions and inquiries

San Sebastian College Recoletos Manila · All Rights Reserved
Privacy Policy
© Copyright 2022
We use cookies on our website to give you the most relevant experience by remembering your preferences and repeat visits. By clicking “Accept All”, you consent to the use of ALL the cookies. However, you may visit "Cookie Settings" to provide a controlled consent.
Cookie SettingsAccept All
Manage consent

This website uses cookies to improve your experience while you navigate through the website. Out of these, the cookies that are categorized as necessary are stored on your browser as they are essential for the working of basic functionalities of the website. We also use third-party cookies that help us analyze and understand how you use this website. These cookies will be stored in your browser only with your consent. You also have the option to opt-out of these cookies. But opting out of some of these cookies may affect your browsing experience.
Necessary Always Enabled
Necessary cookies are absolutely essential for the website to function properly. These cookies ensure basic functionalities and security features of the website, anonymously.
Functional
Functional cookies help to perform certain functionalities like sharing the content of the website on social media platforms, collect feedbacks, and other third-party features.
Performance
Performance cookies are used to understand and analyze the key performance indexes of the website which helps in delivering a better user experience for the visitors.
Analytics
Analytical cookies are used to understand how visitors interact with the website. These cookies help provide information on metrics the number of visitors, bounce rate, traffic source, etc.
Advertisement
Advertisement cookies are used to provide visitors with relevant ads and marketing campaigns. These cookies track visitors across websites and collect information to provide customized ads.
Others
Other uncategorized cookies are those that are being analyzed and have not been classified into a category as yet.
SAVE & ACCEPT
Scroll Up